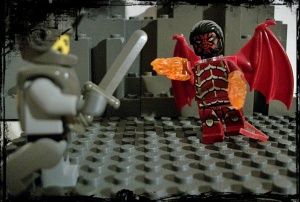 The Zmeu is a draconic being found in Romanian folklore and is often compared to other supernatural creatures such as the balaur, a type of dragon and the vârcolac, a werewolf. Due to the similarity of names, the Zmeu resembles the Slavic dragons, Zmej in their ability to fly and breathe fire.

Unlike other dragons, the Zmeu is often described as having anthropomorphic features as it is very human-like having arms and legs and is able to use or create human-like tools. It is also anthropomorphized due to the Zmeu’s desire to marry human maidens.

The biggest problem with trying to prove a connection to the Dacian-Thracian languages is due to a lack of written language from them and only a handful of words are known for certain. And it gets argued that Zmeu is not of Dacian origins. Instead, the word “Zmei” or “Zmeu” is of Russian, Bulgarian and Serbian origins. In all of these languages, “Zmei” means “snake.” The argument further continues that “Zmei” is of Slavic origin and comes from the Slavic word for earth, “Zemia.” The Proto-Slavic root is “zm” or “zum” So Zmei means a snake or an animal that lives close to the ground or earth, “Zemia.”

Paliga – The linguist, Sorin Paliga, believes that the word Zmeu and the very similar Slavic word Zmey may have come from the Dacian language. He even tries extensively to connect the word to the Romanian word for Earth and Subterranean features. Since then, Paliga’s idea have become contested and disputed.

English – Not really a linguist connection other than how the word translates. The name Zmeu is sometimes translated to refer to a type of ogre or giant due to the Zmeu’s tendency to kidnap a young maiden to be his wife in an otherworldly realm.

Romanian – Another source for the etymology of Zmeu is suggesting a relation to the Romanian word zmeura, meaning “raspberry.” It has been suggested that this may indicate a double meaning for the name Zmeu and is indicator of its true nature and color as a red colored dragon. Additionally, the name Zmeu also refers to a children’s kite. The folklore for Zmeu is also very similar to folklore found in Bulgaria.

In many of the Romanian and Bulgarian stories, the Zmeu is a fierce being known for its cunning, intelligence and dangerous, destructive levels of greed and selfishness. Some of the stories told about the Zmeu, they appear in the sky like a dragon, flying and breathing out a gout of fire. Other stories make mention of the Zmeu having a magical gemstone in its head that shines as brightly as the sun. Aside from its tremendous supernatural strength, the Zmeu is also capable of great feats of magic that can allow it to steal the sun and moon from the sky.

The stories also go on to tell how the Zmeu can shapeshift into human form or as various, different animals. The Zmeu’s natural form is that of a dragon, specifically an anthropomorphized dragon man.

Many Romanian stories depict the Zmeu as the destructive forces of greed and selfishness incarnated. The Zmeu will steal something of immense value that only the Romanian “Fat-Frumos” or “Prince Charming,” a literal translation is “handsome youth” who will be the only one who that can retrieve this valuable object back through his acts of great, selfless bravery. Often times, the Zmeu lives in an otherworldly realm, Celalalt Tarâm where Fat-Frumos must travel to in order to battle with the Zmeu. With descriptions of the Zmeu’s lair being dark, its often thought to imply that the Zmeu lives underground.

Ballad Of The Knight Greuceanu – In this story, the Zmeu steals the sun and moon from the sky and thus envelopes all of the earth and humankind under a cloak of darkness.

Prâslea The Brave And The Golden Apples – In this story, the Zmeu robs a king of his golden apples. This story that has been remarked to bear similarities to the German Fairy Tale of “The Golden Bird,” the Russian story of “Tsarevitch Ivan, The Fire Bird And The Gray Wolf” and the Bulgarian folktale of “The Nine Peahens And The Golden Apples.” In the later stories, the thief is a bird, though in some retellings of the Romanian tale, the Zmeu transforms into a bird in order to steal the apples.

In Moldavia, the Zmeu is a vampiric or Incubus type figure. It will take the form of a flame and enter the room of a young woman or widow. Once in the room, the flame then becomes a man who seduces the woman. 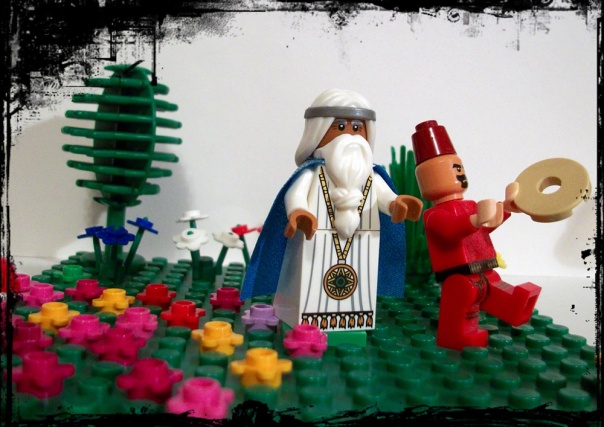 The figure of Amu Nowruz is a familiar one in Iranian and other Middle Eastern cultures for their celebrations of New Year that coincides with the official start of Spring.

In Iranian tradition, Amu Nowruz appears every year at the start of Spring along with his companion Haji Firuz. Their appearance marks the beginning of Nowruz, the New Year.

Amu Nowruz is often depicted as an elderly, silver or white-haired man wearing a felt hat, long blue clock, sash, pants, sandals, and carrying a walking stick. Amu Nowruz’s role is to pass on the story of Nowruz to the young.

One thing I found of interest is learning about Amu Nowruz’s wife, Naneh Sarma. There’s a love story wherein they only meet each other once a year.

According to the one story found, every year, on the Spring Equinox, Mother Simorq flies down from Mount Qâf with Amu Nowruz, the Young Man Spring. Once Simorq has dropped off Amu Nowruz, he heads for a chestnut-colored horse waiting for him. Amu Nowruz will then ride the horse out over the plains towards the city gates where he will meet Naneh Sarma, Grandmother Frost in her orchard just outside the city walls.

By the time Amu Nowruz arrives, he finds Naneh Sarma fast asleep. Instead of waking her, Amu Nowruz leaves a flower he picked for Naneh Sarma on her lap. He then proceeds make himself a glass of tea and stoke the fire so it doesn’t die down. After all this, Amu Nowruz then heads on into the city, bringing Spring time with him.

Shortly after, Naneh Sarma wakes up and finds the flower that Amu Nowruz left and the other signs of his having been there. She weeps finding that her lover has come and gone again. Mother Simorq comes to Naneh Sarma to comfort and remind her that she will have to wait another year for Amu Nowruz’s arrival without falling asleep.

Mother Simorq then carries Naneh Sarma back up to Mount Qâf as she begins to melt. On the top of the Mountain, Mother Simorq lays Naneh Sarma down as she completely melts, knowing that if Naneh Sarma and Amu Nowruz should ever meet, the world would end.

Amu Nowruz’s role in the New Year’s celebration is one very similar to that of Santa Claus or Sinterklaas with the celebration of Christmas in that of one whom is bringing gifts. Depending on the country and the calendar used, Nowruz is celebrated close to the Spring or Vernal Equinox, often close to somewhere between March 19 to March 22.

Nowruz is Persian for “New Day,” marking the first day of the month Farvardin and the first day of Spring in the Iranian calendar. The celebration of Nowruz has its roots in ancient Persian traditions of Zoroastrian religion. Some scholars suggest that the celebration may even be older and have roots in Mithraism. It has survived some 3,000 years and varies a bit in celebration from one country to another, especially among the Middle Eastern cultures, mainly Iranian.

Heralding the start of Nowruz, Hajji Firuz is often seen parading through the city with a troupe of singers and dancers following him. Accompanying him is Amu Nowruz bringing and bearing gifts where Hajji Firuz is the one to demand and expect them.

Shahnameh – The Book Of Kings

The Shahnameh is an epic poem written by the Persian poet, Ferdowsi sometime between 977 and 1010 C.E.

What’s significant is that this poem dates the celebration of Nowruz to the reign of Jamshid, who in Zorastrian texts saves all of mankind from a killer winter that would have killed every living creature. This mythical Persian King likely represents or symbolizes the transition of people going from animal hunting to animal husbandry and the eventual more settled, civilized eras of human history.

Jamshid is credited with the founding of celebrating Nowruz. According to the text of the Shahnameh and Iranian mythology, Jamshid created a throne embedded with gemstones. Sitting on the throne, he had demons raise him up above the earth into the heavens where he sat, like the sun, shining brightly. The creatures of the world would gather around Jamshid and scatter gems around him. This started the day known as the New Day or Nowruz and marking the first day of the month of Farvardin.

While it goes slightly off topic of focusing on Amu Nowruz, I feel it’s important to mention that in 2010, the UN General Assembly recognized March 21st as the International Day of Nowruz. It is recognized as an ancient Persian festival for Spring that has been celebrated for over 3,000 years.

Where for Christians, the celebration of Christmas is often used to promote peace and goodwill, so too does the celebration of Nowruz during Spring. That having more of the world, the global community be better familiar with the significance of Nowruz and its meaning, it will help promote more cultural understandings, friendships, peace and hopefully long-lasting respect.