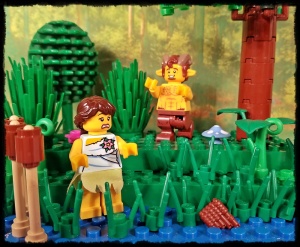 A nymph known in Greek myths for turning into some water reeds to escape the unwanted advances of Pan. Like Pan, Syrinx hailed from Arcadia in ancient Greece.

As a nymph, all of the other nymphs would be counted as Syrinx’s sisters.

Daphne – A fellow naiad who shares the same father Ladon.

Silenus – Only if you count Thomas Woolner’s poem.

Being a Nymph, Syrinx was a virgin like many of her sisters whom were all favorites and followers of Artemis, the goddess of the hunt. Like her patron goddess, Syrinx was also a hunter and desired to remain a virgin.

The Naiads are water nymphs in Greek mythology, minor deities or spirits. Specifically, Naiads were associated with fresh water.

While there are a few sources that will call Syrinx a wood-nymph or just a nymph in general. With her parentage of Ladon as her father, she is most likely a naiad.

This is the main and only story involving Syrinx. It’s generally used to explain the origins of Pan’s famous syrinx or pan pipes. Plus, this story is one of Pan’s more famous and well-known myths.

Syrinx was just one of many nymphs that Pan would endlessly pursue. She was a water-nymph and the daughter of the river-god Ladon. One day, as Syrinx returned from hunting, she encountered Pan who became infatuated with her. To escape his unwanted advances, Syrinx fled from Mount Lycaeum down to the Ladon river. There she pleaded with her sisters (or sometimes the gods in general, her father Ladon or Zeus) to change her into a bed of water reeds.

When Pan narrowly missed grabbing Syrinx, he discovered that when he blew air through the reeds, they made a noise. A forlorn Pan, mourning the loss of Syrinx, took the reeds and crafted his famous reed pipes or syrinx from them.

A Victorian artist and poet, Thomas Woolner wrote a long narrative poem about the myth of Syrinx. He embellishes his tale by having Syrinx become the lover of Silenus. She ends up drowning while trying to escape from Pan’s attempted rape. As a result, Pan turns into a demonic figure while Silenus becomes a drunkard.

Given the Victorian age and when Christianity started associating Pan with the Devil, this makes sense.

An instrument played by the Greek god Pan. It consists of seven reeds all cut to different lengths all tied together and sealed with wax on one end. These reed pipes were synonymous with rustic music and were relatively cheap and easy to make.

Pan would of course use the syrinx in a music competition against the god Apollo. Some sources will credit Cybele or Hermes with having invented the syrinx.

For those who play the flute, the composer Claude Debussy wrote a flute solo entitled “Syrinx” or “La Flute De Pan” in the 20th century. This musical piece is based on Pan’s sadness at having lost his love, Syrinx. It seems to be a popular piece that flautists will learn and add to their repertoire of music.

If you play the saxophone, ” La Flute De Pan” has also been transcribed so it can be played on this instrument too.