In Basque mythology, Tartalo is a giant, cyclops being much like the one-eyed giants of Greco-Roman mythology. In Biscay, he is known as Alarabi. Depending on the story of Tartalo being told, he may be described as being a hunter or a shepherd who lives up in the mountains. Sometimes he is described as a monstrous animal or spirit.

Like many giants, Tartalo is known for being incredibly strong and fearsome. He makes his home in the mountain caves where he will catch young people in order to eat them. Aside from humans, Tartalo will also eat sheep.

There is speculation that the name Tartalo may be related to the Greek name for the underworld of Tartaros. Which could make sense as caves in many folklore and legends around the world are entry ways to the underworld and Tartalo is known for living in them. There’s also a chance that it is coincidence for the similarity of the Basque and Greek words without any actual linguistic connection.

One of the stories related to Tartalo seems to be inspired by and come from the Odyssey. Further, Wentworth Webster seems to feel there is an element of Celtic themes in the stories of Tartalo, as seen in a talking ring he will offer his victims. In many of the stories, Tartalo is often beaten by being outwitted and trickery.

In one legend, two brothers were out hunting up in the moutains when a storm rolled in. They decided to take shelter in a cave in order to wait out the rain. Unknown to the brothers, this particular cave belong Tartalo.

Shortly after, Tartalo returned with his flock of sheep, also seeking to get out of the rain and storm. On seeing the two brothers Tartalo called out: “Bat gaurko eta bestea biharko!” Which translates into English as: “One for today and the other for tomorrow!”

Tartalo proceeded to roll a huge stone in front of the cave in order to trap the brothers. The night, Tartalo took the eldest brother and skewered him on a spit to roast over his fire before eating him. His grisly meal done, Tartalo went to sleep.

While Tartalo is sleeping, the youngest brother steals Tartalos’ ring and then proceeds to take the roasting spit and jams it into Tartalo’s eye, blinding him. Screaming and in a rage, Tartalo starts flailing about, searching for the boy.

The youngest brother hid himself among Tartalo’s sheep and used a sheep skin to make it more effective. Either way, hiding from Tartalo now wasn’t hard to do with the now blinded giant.

Morning finally arrives and Tartalo decides to remove the huge stone from his cave entrance. He has the idea that as he would call his sheep out for the day, that’s when he would catch the younger brother. Tartalo stood at the entrance of the cave, his legs spread apart, making it so that the only way out from the cave was underneath him.

The younger brother was still wearing the sheep skin and knelt down to all fours, hoping to still elude the giant. The plan worked, that is until, in the versions of the story where the ring is involved, it started calling out: “Hemen nago, hemen nago!” The English translation of this phrase being: “Here I am, here I am!”

Hearing the ring, Tartalo took off in hot pursuit of the younger brother. The younger brother found he was unable to take off the ring once he had it on to escape the giant. When he got to the edge of a cliff, there in desperation, he cut off his own finger and threw it over the edge of the cliff. Still chasing after the sound of his ring, Tartalo fell off the cliff to his death. 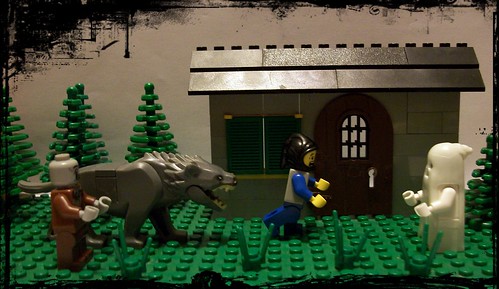 In Basque mythology, Aatxe is a shape-changing spirit who sometimes takes the form of a fiery red bull or a young man. Aatxe is sometimes identified with another Basque figure known as Etsai. He is also identified with the goddess Mari and may possibly be a manifestation of her will. Though he is more likely just an enforcer and separate. Mari is said to be quick to punish those who lie or cheat and the Aatxe is sent out against those people who have lied, cheated, stolen and have other wise been disrespectful.

There is an old Basque witches song that has the line of: “Yaun Gorril, Yaun Gorril,” which translates into English as “Lord Red, Lord Red.” It’s thought that this line most likely refers to Aatxegorri, showing that he is an important figure in the Basque mythologies and pantheon.

Aatxe comes from the underground world of Euskal Herria. He haunts the caves and gorges of the Pyrenees Mountains, coming out at night, especially during stormy weather, to attack and punish criminals; he also protects people by making them stay home when there’s danger.