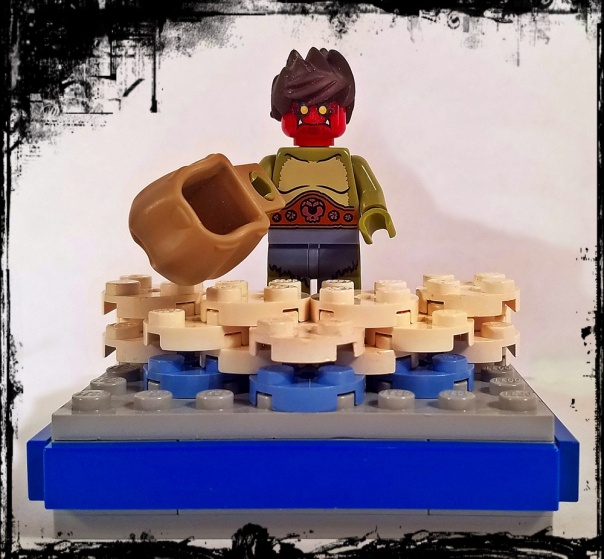 Fujin is one of the oldest Shinto goes in Japan. He is a god of wind and is often paired with the storm god Raijin.

Fujin is often shown as a fearsome wizard-like demon with green skin and a red head wearing only a leopard skin and carrying around a large bag or bags of wind with him. He is also noted to have only four fingers or digits that represent each of the four cardinal directions.

The gods Izanami and Izanagi, the main deities in Shinto are who birthed or created Fujin and all the other gods in Japan.

In addition to Raijin and his brother Fujin, all of the Kami of Japan can be said to be Fujin’s brothers and sisters as they were all created after the creation of Nippon (Japan).

Like Raijin, Fujin was born or created by the gods Izanami and Izanagi after creating Nippon. When Fujin opened his wind bag for the first time, the winds he released cleared away the morning mists and filled the space between the earth and the heavens so the sun could shine.

Kojiki – This ancient Japanese text is the primary source for everything known about Fujin.

The Silk Road – Surprisingly, the imagery for Fujin seems to have originated from the West, during the Greek’s Hellenistic era when they were once spread throughout areas of Central Asia and India. Meaning, that the wind god Boreas is whom Fujin could have originated from. As the imagery for Boreas traveled, he would become the god Wardo in Greco-Buddhist era, changing then to the wind god Fei Lian (or Feng Bo) in China before making his way to Japan as Fujin. What appears to be the connecting motif is that all these deities carry a bag of wind (or shawl in the case of Boreas) and has a disheveled, wild appearance.

In 1274, the Mongols for the first time would attempt to set sail and invade Japan. However, a massive typhoon would destroy a good number of the Mongol fleet, disrupting plans for a conquest of Japanese archipelago. Going by the legend, only three men are said to have escaped. A second attempt in 1281 saw a similar typhoon blow through and wreck most of the Mongol fleet again. Both massive storms or Kamikaze as they would come to be known were attributed as being sent by Raijin and Fujin to protect Japan.

One of Fujin’s alternative names is Kami-no-Kaze, directly connecting him to these fierce, massive storms.

Some of the descriptions of Fujin say he’s an oni and that certainly seems true given his description and when looking at more Buddhist influenced stories where the gods had to battle Raijin and Fujin to tame them and convert them to Buddhism.

Kami – When we go back to the Shinto religion that predates Buddhism in Japan, Fujin is one of many, numerous gods or kami found throughout the region. They range in power from low level spirits all the up to gods.

Shintoism holds the belief and idea that everything seen in nature has a spirit, or kami. As spirits, they just are. The greater the spirit or kami, more of a force of nature and raw power it will be. So many of these spirits would be revered and respected just to avoid needlessly getting them angry and ticked off.

Oni – By Japanese mythology, Oni are very synonymous with the Western concept of demons. Ugly, ogre-like creatures of varying descriptions. An Oni’s only purpose is to create chaos, destruction and disaster. Given depictions of Fujin, he looks very much the part of an Oni and when it comes to wind storms, a more severe storm can be very destructive.

With some of the more primal nature spirits and gods, it’s a very thin line for the concepts of good and evil if you’re trying to pin them to those categories.

When Raijin is mentioned, he is frequently paired with Fujin, another Weather God is also a sometimes rival. The two are constantly at it, fighting amongst themselves over who will rule the skies. The more intense a storm, the more intense their fighting.

Temple Guardians – Statues of Raijin and Fujin can be found at the gates to many temples and holy places in Japan where they are seen as protectors and guardians.