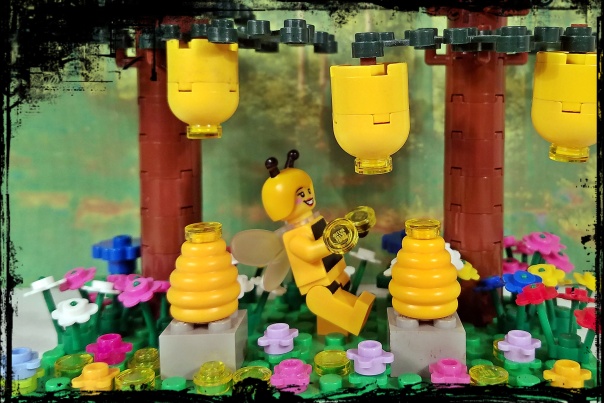 Etymology: From the Latin “mel” or “mellis” meaning honey

According to St. Augustine, Mellona is an ancient Roman goddess of bees and honey. In Arnobius’ “Adversus Nationes”, Mellona is an important and powerful goddess to call on for taking care of bees, the production and abundance of honey. W.H. Roscher includes Mellona in a list of deities called the ingitamenta maintained by Roman priests to make sure that the correct god would be invoked for different rituals.

There’s not much more regarding Mellona that I found. She seems with the amount of lore that I could find, to be a minor goddess.

There are a handful of other gods whose domain included bees. They are:

You could say all of them are the Bees’ knees.

“If the bee disappeared off the surface of the globe then man would only have four years of life left.”

That’s a quote often attributed to Albert Einstein. Much as I am on board with the idea of being better environmental stewards and caretakers, the quote is incorrect. Checking the quote against Snopes, it’s a comment made for political reasons.

Now I’m not saying we suddenly start going out knocking over beehives and going willy nilly with spraying neonicotinoids in our gardens,

However, I do feel we want to be better Environmental Stewards, taking care of our earth. Yes, the domesticated honey bee is the most hit by the Colony Collapse Disorder or CCD and other problems with diseases and parasites that hit hives. Neonicotinoids are still a concern and a problem.

While there are other pollinators, some natural pollinators like in Southern China and Hawaii have become extinct or rare. Let’s not push our luck.

Those honey bees work very hard for us, being better mindful of our connection to nature would be in order.