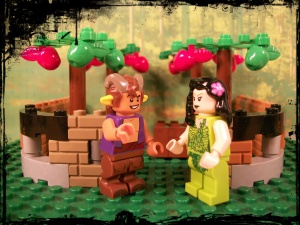 In Roman mythology, Vertumnus is a rustic woodland deity of the seasons, changes and the ripening of plants. When he marries the nymph, Pomona, Vertumnus becomes the patron of gardens and fruit trees.

Cult – Vertumnus’ cult is believed to have become active in Rome around 300 BCE. A temple dedicated to Vertumnus was established in 264 BCE on Aventine Hill. This same date has been noted by others such as Propertius, that Volsinii, the Etruscan city of Velzna was conquered by the Romans.

Festivals – Vertumnalia is shared by both Pomona and Vertumnus, is held on August 13th where offerings of fruits and flowers would be made.

Signum Vortumni – This was a bronze statue of Vertumnus created by the sculpter Mamurius Veturius. This bronze statue replaced an earlier maple statue and was reputed to have been brought to Rome during the time of Romulous. The statue stood in the Vicus Tuscus near the Forum Romanum and decorated according to the current season.

The primary source for Vertumnus comes from Ovid’s Metamorphosis and it has been commented that the story of Vertumnus is the only original Roman story within this piece of literature.

As for the story, Pomona spurned the love and advances of various woodland gods: Picus, Priapos, Silenos and Silvanus to name a few. Busy with tending her own gardens and orchards kept locked and closed behind walls, Pomona felt she didn’t have time for anyone else.

Of all the rustic, woodland deities vying for Pomona’s attention, Vertumnus is the one who succeeded. Like the other gods, Vertumnus was rejected, though I would think coming in disguise wouldn’t help the matter. First as various field laborers and farmers, Vertumnus hoped that this would somehow attract Pomona’s attention.

Eventually Vertumnus came to the idea of disguising himself as an old woman. Disguised so, the “old woman” approached Pomona and started off with complimenting her fruits. Pomona was taken back a moment when the old woman kissed her. Seeing that Pomona was started, Vertumnus in his guise as the old woman sat back and began talking about an elm tree and a grape vine, how beautiful the two were together. How the tree was useless by itself and how the vine could only lay there on the ground unable to bear fruit. Continuing this angle of talk, the old woman compared Pomona to the vine, how it tried to stand on its own, turning away from everyone who tried to be close. At this, the old woman spoke of Vertumnus, how Pomona was his first and only love, how he too loved gardens and orchards and would gladly work side by side with her.

The old woman than shared the story of Anaxarete, who had spurned the advances of her suitor, Iphis to the point that he hung himself. In response, the goddess Venus turned Anaxarete to stone for being so heartless. Hearing this story, Pomona softened her stance and Vertumnus dropped his disguise as the old woman and the two were eventually wed.

Vertumnus is heralded by many as a deity who presides over changes, as seen in the latin roots of his name: “vertere,” to change or turn. In this sense, turning has more to do with the Tiber river, whose’ course Vertumnus is said to have altered, causing pools and marshes to recede and vanish.

Vertumnus is still the god of the changing year as seasons pass from spring to summer, to autumn and winter and back towards spring. This role also allowed for Vertumnus to be a shape-changer as he would disguise himself in order to be close to Pomona in his efforts to try and woo her.

Numina, in Roman mythology, were the guardian spirits who watched over people, places and even the home. Each numina was unique or specific to where and whom they watched over.

Vertumnus, along with his wife Pomona were seen by the Romans as guardian spirits who would watch over people in their orchards and gardens.

Not much is known about the ancient Etruscans. It is known they lived along the northwest coast of Italy with their own culture and distinct language that is older from that of the ancient Romans. Not very many words were translated by the ancient Romans of the Etruscan language, so not is preserved or known. The Roman scholar, Varro was certain of Vertumnus’ status as a major Etruscan god.

So, it’s somewhat surprising that Voltumna would make his way into the Roman pantheon and have nothing to do with the Greek pantheon that the Romans were known for having taken whole sale and giving Roman names to Greek deities.