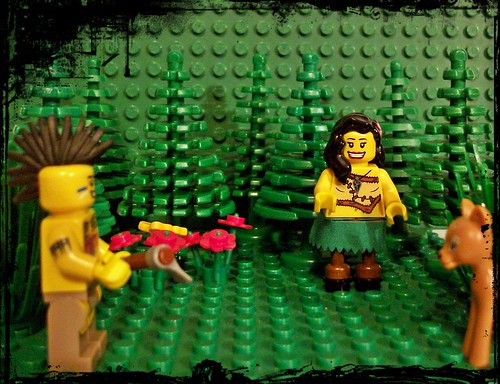 The Deer Woman is a familiar figure in many Native American legends and mythology of Oklahoma, Western United States and Pacific Northwest. Notable tribes are the Creek, Lakota, Omaha, Ponca and Potawatomi.

In the legends surrounding Deer Woman, she is often just off the trail or behind a bush, calling men over to her, particularly unfaithful or promiscuous men. It is frequently too late, when men are enchanted and drawn to her, that they notice she isn’t all that she seems and find themselves trampled to death beneath her hooves. A more “luckier” man might find himself pining away, longing for a “lost love.” In the more malign interpretations of Deer Woman, she is often presented as a bogeyman, seducing men before she kills them.

She is sometimes seen as a form of succubus or vampire, draining her victims of their life force. The Deer Woman legends certainly do seem to hold a certain familiarity to the Irish stories of the Fae, who have sex with a mortal man and who is then never satisfied with a human lover.

In the Lakota versions of Deer Woman, she doesn’t kill men, instead she takes their soul so that he will be lost for the rest of his life. As to the women, Deer Woman spirits them away so that they are never seen again. In these, stories, Deer Woman is described as a black-tailed deer.

Other stories surrounding Deer Woman, describe seeing her as sign of warning or a time of personal transformation. She is very fond of dancing and has been known to join in on communal dances; leaving when the drumming stops. More benign interpretations of Deer Woman’s myth connect her to fertility and love who help women during childbirth.

In this t.v. series featuring life on the Reservation for several young Native Americans, Deer Woman is mentioned in passing by Officer Big. The fifth episode features Deer Woman as Officer Big tells his origin and back story of why he choose to become an officer.

According to Ojibwe traditions, Deer Woman can be banished by the use of tobacco smoke, prayers and chanting.

Deer Woman’s spell or enchantment can also be broken by looking at her feet. Once Deer Woman realizes she has been found out, she runs away.

There are a few other, similar figures found in other cultures from around the world.

Baobhan Sith – Scotland, a female vampire said to have goat legs. She seduces travelers and drinks their blood.

Fiura – Chile, a goblin seductress who drives her victims insane.

Iara – Brazil, a siren-like entity who leads men to their death. Descriptions place her as being a fish woman with a blow hole in her neck.

La Llorna – Hailing from Mexico and the Southwestern United States. Descriptions often cite her as having no feet.

La Patasola – Colombia, a siren-like entity, leading men to their death. Descriptions often cite her as having deformed feet.

Sirens – Greek & Rome, Aquatic females, infamous for luring men to leap from their ships to a watery death by their hypnotic songs.

Tunda – Colombia, a siren-like entity, leading men to their death. Descriptions often cite her as having deformed feet.

Xana – From Asutrias, Spain, a siren-like entity who leads men to their death.