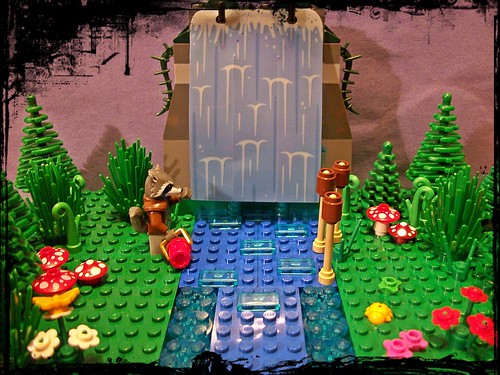 Azeban is a low-level raccoon trickster spirit in Abenaki folk lore and mythology. The Abenaki’s traditional homeland is known as Wobanakik, meaning “Place of the Dawn” and located where Northern New England and South Quebec are today. Another tribe that Azeban is associated with is the Penobscots.

Like many animal tricksters from Native American folklore, Azeban is known for doing many foolish and mischievous things. Unlike many of the tricksters, Azeban is not dangerous or malevolent as they prefer to tricking others for food or other deeds.

There are a few stories regarding Azeban and his antics.

For those who study the stories and folklore of the Abenaki, there is a story where a woman, Cedar Girl named her six dogs based on their characteristics. This had caused a lot of confusion because people that the trickster of Azeban was a dog, not a raccoon. The dog was so named as he had the characteristics of a raccoon.

As to the story itself, Azeban, the dog was one of a litter of six pups born to Awasosqua or Bear Woman. The other pups were: Awasosis (Little Bear), Kwaniwibid (Long Tooth), Mikwe (Squirrel), Moosis (Little Moose) and Soksemo (Good Nose). All six pups are spirits and so named for their characteristics. But when you’re translating from one language into another, you can see how misunderstandings and mistakes can happen.

This is the type of story that explains how the raccoon came to have his black facial mask and ringed tail.

Once there were two blind men living in a village who had become very unhappy as they could no longer see or do things for themselves. Frustrated and unhappy, the two settled themselves on a log, determined to remain there.

They remained there until Glooscap happened upon them one day and asked what was wrong.

The two replied that no one wanted them around as they could no longer take care of themselves or help anyone else and were planning to remain on the log until they died.

Not willing to let them die unable to take care of themselves, Glooscap built a wigwam for the two. Then he took a rope, instructing them to go down to the river and tie it to a tree and to tie the other end to a bucket. When the two wanted to drink, all they needed to do was put the bucket in the water and pull it back in to them.

This of course is where Azeban or raccoon comes into the story. He saw what was going on and decided he would enjoy a bit of fun and mischief.

When one of the men went down to get water, Azeban followed after. When the bucket was thrown into the river; Azeban very sneakily took the bucket and moved it up onto the sandy bank.

Pulling in the bucket, the blind man found only sand in his bucket and not water as expected. The man returned to his friend lamenting that the river had gone dry and there was no more water to be had.

The friend accused the other of being lazy and not having gone at all for water. That he was just making excuses.

The first man insisted he told the truth and the second man went down to the river so he could prove it.

Azeban had already gone back down to the river and moved the bucket back into the water so that when the second man arrived, he was able to pull up some water. This only confirmed the second man’s accusations of the first being lazy. This started a fight and argument.

Some time later, Azeban noticed that the two men were cooking dinner. They had four pieces of meat in a pot. Planning more mischief, Azeban stole two pieces of the meat and then hid himself.

When the first man came to serve himself, he took two pieces of meat from the pot. It is when the second man went to get his food that the trouble began again. He accused the first taking all the meat for himself in addition to being lazy and refusing to get water.

The first man claimed he had only taken two pieces of meat and that there should still be two other pieces of meat. Once more the two men fought and Azeban just sat back laughing to himself about it.

Eventually Glooscap returned and saw the two fighting. He asked them what the fighting was all about and the second man told of how the first was too lazy to get water from the river and then his taking all of the food.

Hearing that, Glooscap looked around and quickly spotted Azeban where he was laughing at the two blind men. He knew then instantly what was happening.

Glooscap proceeded to take a piece of coal from the fire and then he seized Azeban, drawing a black mask around his face. He told Azeban that this was for stealing the meat from the two men. Then Glooscap took the coal and drew four rings around Azeban’s tail, telling him that this was for causing all those fights. These marks would be a reminder of Azeban’s misdeeds and thievery.

In this story, Azeban was out wandering around looking for something to do rather than stay at home, taking care of the things that he should have been doing.

As Azeban wandered along through the wood, he heard the chirping of baby birds above him in the trees.

Azeban called up to the baby birds, trying to get them to come down to him and play. The mother birds knew of the type of mischief and trouble that Azeban could cause and forbade their nestlings from going. They knew Azeban to be a nest robber and that he was very likely to eat the young fledglings instead of playing..

Prevented from causing trouble with the birds, Azeban wandered on until he found himself in a valley leading through some hills. Tilting his head, Azeban could hear something that sounded like a good number of people all shouting.

Curious, Azeban went to go find the source of the noise. He followed the sound ot the end of the valley. As the noise got louder, Azeban finally found the source when he pushed through some bushes and found himself at the edge of a cliff.

There, Azeban found himself looking out over the Winnoski River as it flowed down, forming a waterfall. It was the sound of all this rushing water and the roaring sound it made that Azeban had heard.

For some reason, Azeban decided to get into a shouting match with the waterfall. As it is just water and a waterfall, it couldn’t answer back to Azeban’s challenges and kept on doing what rivers and waterfalls do.

So Azeban kept yelling, angry that the waterfall would ignore him. With each challenge that Azeban made to the waterfall, he couldn’t out match the sound of the roaring water.

Eventually with Azeban’s antics of trying to out shout the waterfall, he got too close to the edge of the cliff where he lost his balance, falling into the water and getting swept out over the falls.