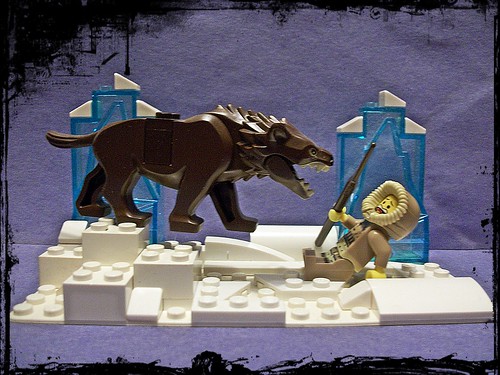 In Inuit mythology, Amarok is the name of a gigantic, monstrous wolf. There is another wolf entity, Amaguq who is a Trickster deity. While very similar and from the same culture, neither Amarok nor Amaguq are the same being.

Amarok is said to hunt down and devour those who are foolish enough to go out hunting alone at night. Unlike other wolves who hunt in packs, the Amarok is a lone hunter.

* One particular legend of Amarok is that of a young boy who was physically stunted and was hated by his village. Wanting to improve his strength, the young boy called out to the Lord of Strength. At his call, an Amarok appeared and proceeded to knock the boy to the ground with its tail.

This act caused a number of small bones to fall from the boy’s body. The Amarok told the boy that these bones had prevented his growth and that he needed to return daily in order to increase his strength. The boy did so and after several days of meeting with the Amarok and wrestling him, he gained enough strength that he was able to beat three large bears and win the prestige and esteem of his people.

* Another legend tells that Amarok came when the caribou had become so numerous that many were becoming sick and weakening from the lack of food. Amarok began hunting the weak and sick caribou so that the herd was strong and healthy again.

* Yet another story goes that a man, who mourned the death of a relative of his, had heard that an amarok was close by. Deciding to seek out the amarok’s lair, the man took another family member with him.

Once the two had found the amarok’s lair, they found it had pups and they proceeded to kill all of them. The deed done, the man’s family member became frightened and the two fled to go hide in a cave.

From the cave’s entrance, they could see the amarok returning with food for its pups. When the amarok couldn’t find its pups, it ran to a lake nearby and began to pull something human-shaped up out of the water. At the same time, the man fell dead at his relative’s feet.

It is believed that the amarok took the man’s soul from his body as “nothing remains concealed” from the amarok and no matter how far away the man hid or ran, it would extract revenge for the death of its pups.

There are many stories where an amarok kills or captures people.

The stories surrounding Amarok and his description sound plausible enough to some that he may have a real world basis.

Dire Wolf – These Ice Age predators lived some 1.8 million years to 10,000 years ago. They like so many of the Pleistocene megafauna died out during the end of the last Ice Age. Its very possible that the ancestors to the Inuits passed on stories of dire wolves as their descriptions are similar to that of Amarok with being large (five feet long) wolves.

Hyaenodon – Another Ice Age predator, they were the early ancestors to modern hyenas with the largest being the Hyaenodon giga. It has been suggested by some that stories of Amarok may be stories of this creature.

Shunka Warakin – For those who follow cryptozoology, among the Iowa tribes (part of the Sioux), the name means “carries off dogs.” Like the Amarok, it is described as being a large wolf-like animal of Native American folklore.

Waheela – Another cryptozoology candidate, Amarok is sometimes seen as being the same as a creature known as a Waheela. Stories of the Waheela are found in the Northwestern part of Canada. They are also a wolf-like creature similar to the Amarok.

Personally, I think the Dire Wolf is the most likely candidate for any real world or historical basis and truth to the Amarok. The Waheela and Shunka Warakin are also likely when seen as possibly being the same animal, just a different name.