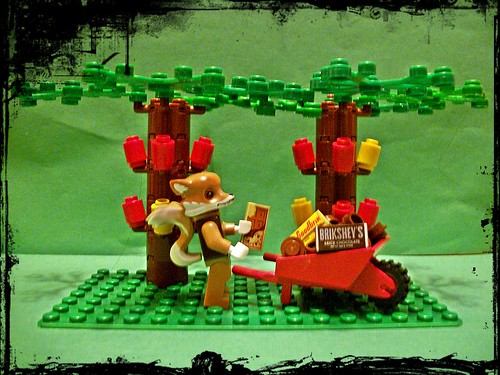 Aguara is a South American Fox god who is responsible for giving the carob tree as a source of food for people. Effectively, he is a god of chocolate. Can’t go wrong there!

I do have to wonder about whoever did the initial writing down and researching for Aguara. A lot appears to be continued repetition and the result of bad research with a no one who knows enough about the subject to say “Hey! That’s incorrect!”

Most of the websites that give anything about Aguara, place him among Native American Deity lists. And that works when those sites in question include gods from North America down to South America. Other sites seem to be repeating bad information citing Aguara as a North American god.

First off, Carob Trees are found in the Mediterranean, over there in Europe. They do have an edible seed pod that is used as a vegan alternative to cacao or chocolate. It is not as flavorful as chocolate, but given how much refined sugars are found in chocolate today or if you’re allergic to chocolate, it’s a good choice.

Second, Cacao Trees are found in South America and it is from the cacao beans that we get our chocolate.

Now, it is highly possible, that when European Explorers landed in the area, that they called the Cacao Trees by what they were most familiar with back home, Carob.

Properly, the animal referred to as Aguara isn’t a fox, though it does looks like a large red fox with long legs suited for and adapted to the grasslands it calls home in South America, especially its major habitat areas found in Brazil. They represent the tallest of the canine family and are in a genus of their own distinct from dogs, wolves, foxes and even jackals.

This is the tribe often listed as whose pantheon of gods that Aguara would belong to.

Curious, I went to look this up. I didn’t find much on who the Tunpa were supposed to be. Just what seems to be more listings of various Native American tribes.

I did come up with a book called “Magic: A Sociological Study” by Hutton Webster from the Standford University Press, 1948. In it, the word tunpa refers to “superhuman” power. With a capital T, Tunpa can also refer to certain dead people who possess superhuman powers.

One site did mention the Chiriguano tribe found in South America from the Andes, Argentina and Boliva. Incidentally, the Chiriguano along with the Chané are those South American tribes mentioned in “Magic: A Sociological Study” that use the word tunpa.

My list of information for Tunpa also included mention of a warrior who took up the name when leading others into battle.

So we seem to be getting closer to a connection for Aguara’s South American origins. By the time I got done with looking up everything, I have to wonder about Aguara’s authenticity given the amount of poor research and repetitive re-listing the same information found among numerous websites.