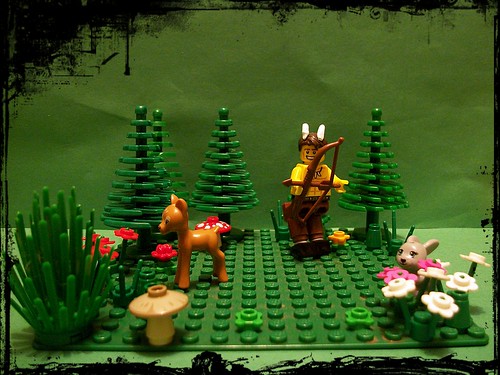 Clapping has been mentioned as the literal meaning for Krotos’ name.

Krotos is the son of Pan and Eupheme. In his own right, he is a minor god or daimon and a satyr like his father Pan. Krotos is noted for being a great hunter, musician and lover of the arts. In Greek mythology, he is credited with inventing the hunting bow and rhythmic beats or clapping to accompany music. So impressed were the Muses, that they awarded Krotos a place up in the heavens as the constellation Sagittarius. A slight variation to this story is that Krotos pleaded with Zeus to place him up among the heavens at his death.

Krotos is best known for hanging out with the Mousai or Muses on Mount Helicon whom his mother was a nurse-maid to. The Muses were the goddesses of the arts and sciences of whom there are nine of them.

That will depend, both spellings are correct. Crotus is the Latin spelling used by the Romans and Krotos of course is the Greek spelling. When looking up information on Crotus after doing my post for Sagittarius, many of the links that came up on him are in connection to this zodiac sign and constellation.

When trying to find information separate from the constellation, it is the spelling of Krotos that yielded any results. And due to extreme similarities for spelling, I also got links for Kratos, God of War video game. So be careful not to confuse the two, Kratos will be a post for another day.

You Called Him A Daimon!

Yes, as in the Greek term and meaning for the word spirit. It is Christianity that takes and twists the word and meaning to Demon, for an evil spirit or being.

Among the ancient Greeks, the word daimon means spirit or “replete with knowledge.” They recognized both good (eudemons) and bad (cacodemons). The word or term daimon also means “divine power,” “fate,” or “god.” And in Greek mythology, daimons could also include deified heroes. This seems to be the case for Krotos, a defied hero according 1st century C.E. Roman Mythographer, Hyginus in his writings: Fabulae.

Daimons functioned as messengers or intermediary spirits between men and gods. The good daimons were viewed as guardian spirits who gave guidance and protection to those they watched over. The bad daimons, naturally, weren’t so nice and could mislead people, getting them into trouble.

Let’s Give A Round Of Applause!

Growing up with the Muses and hanging around with them meant that unlike other satyrs, who were a rough and wild bunch, Krotos was more cultured and refined, having an education beyond that of just hunting skills and physical prowess.

What’s significant to this, is that Krotos is the one who came up with clapping or the applause at the end of a performance as a way of showing audience appreciation instead of loud yelling or cheering. That is what won the adoration of the Muses more than anything with Krotos, his love and appreciation for the arts, sciences and general knowledge. Far more than strutting around and showing off his manly or satyrly prowess.

As stated before, the Muses were so impressed with Krotos’ skills that they made a request of Zeus to place him up in the heavens as a constellation. This of course being Sagittarius. As Krotos wanted to show off all of his skills as a hunter, the horse body was to show that he rode a lot. The arrows then show Krotos’ keenness and swiftness. He also ends up with a satyr’s tail as the Muses loved Krotos as much as Dionysus loved his satyr retinue. Lastly, at Krotos’ feet are a few stars forming a circle which represents a wreath like ones that could be found thrown off at play.

Later mix ups in the story of Sagittarius Constellation that link Chiron instead of Krotos seem easily explained as both were known for being greatly skilled and peaceful by nature where the other centaurs and satyrs were known for being more wild, rowdy and uncivilized in their behaviors. It has been pointed out by Eratosthenes that centaurs like Chiron didn’t use bows, so he can’t be who is mentioned as Sagittarius but Krotos who invented and used the bow.

Etymology – In Ancient Greek: Ὑάδες “the rainy ones.” The Greek word: hyein – “to rain.” It may also come from the Greek word hys or hus for “swine.” Latin – Suculae, “Suckling-pigs” or “little pigs.”

In Greek mythology, the Hyades are the five daughters of Atlas as well as the half-sisters of the Pleiades. As minor goddesses or nymphs, they are associated with bringing rain and stormy weather.